Rest assured, I’m not normally the type to think Build-a-Bear is a highlight when it means being pulled away from the actual game, but we had an experience last night that was super fun and it was indeed a highlight, both for the girls and for me.

We went to find the Build-a-Bear just after the end of the third inning. After choosing the appropriate over-priced stuffed Cardinal memorabilia, we proceeded to the stuffing station. Just as we approached the machine, Fredbird appeared and grabbed Katie’s bear and began a stuffing display unlike any I’ve ever seen. He was hamming it up in the Build-a-Bear, pretty much just for our benefit. He stuffed (with the girls, of course) all four of their bears/birds, made a mess with the stuffing machine, and posed for pictures with all of us. 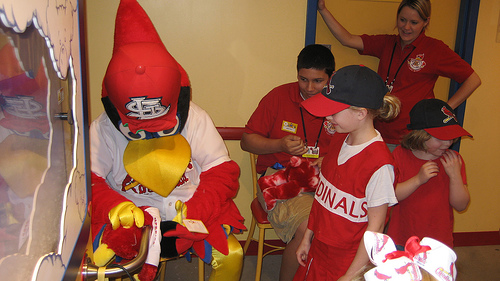 After he left, we were informed by the Build-a-Bear staff that he doesn’t do that very often and it was the first time this season that he had, so it was extra special last night. The girls talked about it quite a bit for the remainder of the night, and I think they’ll remember that for a long time.
And oh, yes – we did also watch the game. Cards won. Yippee!