A fellow homeschool family gave us their old playhouse last week. The catch involved was simply that we had to haul it home and then (ahem) rebuild it from a series of photos the original owner took when he tore it down.

If you know Craig at all, bless his soul, you know that “construction” isn’t one of the first words he puts on his resume, and that I am usually the one to use the tools around here (though he is stronger, by far, and very useful for lifting; he also hangs a darn straight picture).

But, as soon as finals were over, he borrowed a friend’s truck and made three trips between here and there and here again hauling all the parts of the goofy thing over here. And then, though I begged him to wait for some help, he began constructing it. Alone. And with just a bit of help here and there from Ed, and some roof raising help from Dick and Peter Schamp, he did it. He built the girls their very own Cair Paravel.

He had a coronation ceremony tonight in which he presented the four queens of the castle with flowers and led them in a line up to their thrones. 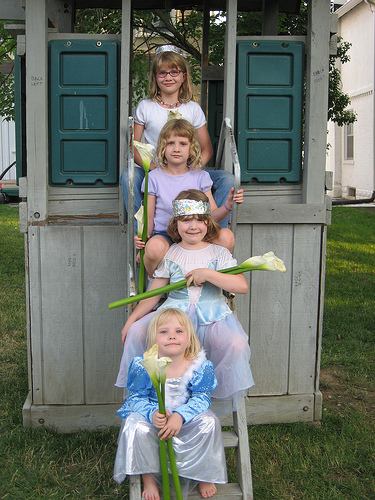 And here’s the self-titled Court Jester himself: 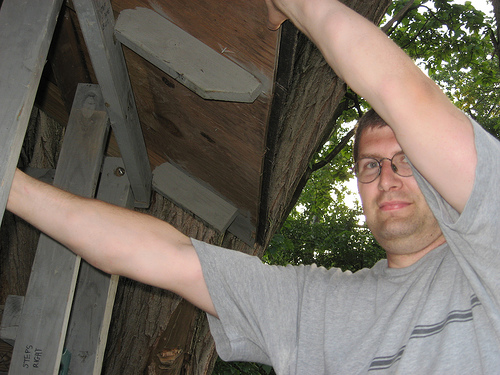 He did it. And he’s got the blisters, splinter spots, and callouses to prove it. The girls are thrilled and he says that he’s bought himself some time from my need-to-move-every-two-years-attachment-disorder. I just told him that I wouldn’t make him tear it down and move it with us.

I’m so proud of him, as he did this and we’re all still speaking to each other.

And Colorado friends, if that didn’t make you drop over dead to know that Craig did this pretty large building project almost entirely by himself, then this might: I made vegetarian hamburgers last night and after rolling his eyes at me, he tried one and said, “Okay, I guess it’s not really that bad.”

Times, they are a changing!