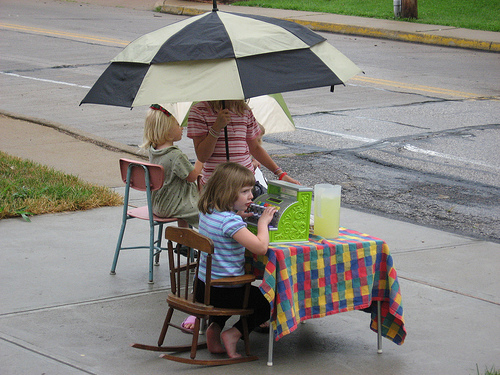 As much as I tried to convince them that people don’t really stop at lemonade stands in the rain at 8am in the morning, they were bound and determined to try their hand at capitalism yet again.

Still, they’ve made about $5 so far (never mind that $3 came from Daddy, Katie, and Millie). I took pity on them and quickly made them a new sign, though it’s not protected much better than the other one and should soon see the same fate.

And yes, I’m questioning the wisdom in letting them sit outside in the rain all morning and wondering if it will mean sniffles later on today. I’m hoping they can prove to be resilient kids who can just play in the rain without harm, even if that “play” is their second attempt at filling their piggy banks.