After all the posting I did about Chicago, you’d think I’d be done by now. But I have one more story: how Amtrak derailed our return trip on Saturday.

This was our view of Chicago as we said good-bye from the last car of the train (which surprised us by leaving on time). Ever hopeful, we should have known better. We learned to dread the train sound system, because every time it came on we heard something like this:

“Ladies and gentlemen, this is the conductor. I apologize for the delay, but ________. We plan to be on our way shortly. Thanks for your patience.”

The various scenarios included (and I’m not making these up): 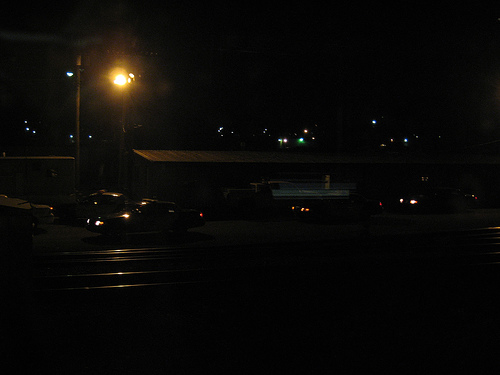 It’s not a good picture of the police cars, I know, but what else are you doing to do while waiting for 3 hours with no word from Amtrak as to what in the world is going on? You try to take a picture to post on your blog, of course. This was after making sure all the girls had shoes on and that my purse, camera, and computer were within easy arm’s reach in the event we had to make a speedy evacuation.

In my mind, I kept thinking, “It’s drug related. No, it can’t be drug related, if it were, they would be searching all the bags and there would be a drug dog on board. Not drugs. OH NO! IT MUST BE A BOMB! Wait, it can’t be a bomb. If we were in danger of being blown up, wouldn’t they have evacuated the train already? They would, wouldn’t they?” You know, calm, rational stuff like that.

My family at – can you see that clock? – 12:17 am. We just hadn’t had enough of Amtrak by this point, so decided to wait around the station for photo opportunities. While we did this, we took bets as to whether the 3 bags and 1 box that we checked made it back with us. Our bad train karma prevailed: half of our bags were either left in Chicago or headed on toward Little Rock. Nobody knows.

The important thing is that all the children made it back with us. Oh, and our train was not, in fact, hijacked after all. And we slept until 9 this morning. And all the dirty laundry from the week is taking a joyride on an Amtrak train somewhere in the Midwest. It’s all about the silver linings.

We’re officially two for two on bad Amtrak experiences. We’ll see if the lure of the low price will draw us back the next time we decide to go to Chicago. After last night, it’s not likely.