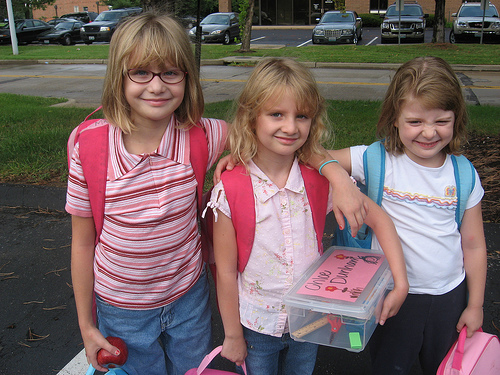 I spontaneously wanted to do something meaningful for the girls this morning as they finished breakfast and before we loaded up in the van to head to their first day of school-away-from-home. Michael Card’s Barocha came to mind, so I began singing it to the girls as a sort of blessing on their time away from home. There was just one problem with that plan: I’ve had a bit of a weather-change cold for the past few days, so my voice first thing in the morning wasn’t exactly cooperating. After doing my best This is Spinal Tap version of Michael’s beautiful song, I gave up and plugged in the iPod.

The day proceeded mostly as planned, closely supervised by my Thursday boss:

Actually, the day with her was just about perfect. I let her watch a movie when we got home, and then we had a much-anticipated (by Millie) picnic on the floor of the living room with her lunch in a lunchbox. I actually even read Curious George to her after that, and she took a nap on the floor for the rest of the time. I spent the entire movie time and nap time working on my new project, so that was all good.

Then things began to unravel somewhat: on our way to pick the girls up, we were on a highway where a major traffic accident had just occurred, so we were stuck for 20 minutes until I wormed my way three lanes over to the nearest exit (which wasn’t the one I needed to get off on) amid much honking by other frustrated drivers (and, I’m sure, plenty of special hand waves aimed in my direction). I didn’t care – I was going to be late picking my kids up on their first day of school ever, and I just didn’t want that to happen. As it was, I was still 10 minutes late, but not the only parent to get stuck in the accident.

But things continued to spiral down a bit. Maddie, who according to a tale of two witnesses (that of Chloe and the teacher) really enjoyed the day and did well, was grumpy with the rest of us the entire way home. Katie decided she should be grumpy with all of us also, so we had a really pleasant car ride back (during which we avoided all highways courtesy of the traffic accident).

I let them watch a DVD when we got back to decompress after the day, but we had to turn right back around 45 minutes later to do the choir drop-off shuffle (they are in different sections this year, meeting on opposite sides of a very busy street). On the way to choir, Maddie realized that she would not get to see Craig today and that the rest of us would be eating dinner without her. Her choir section is 90 minutes long, while Chloe’s is 45 minutes long, so Craig picked up Chloe and then brought her to the seminary where Katie, Millie, and I were waiting with dinner to eat with him before he left for class.

This is the only window of time on Thursdays in which *most* of the girls can get 45 minutes with him, but it just happens that Maddie isn’t in that *most*, and after a long day full of brand new experiences and being very tired, realizing that not only would she not see Craig, but that she would have to eat dinner alone later unraveled her completely as I escorted her into choir with tears in her eyes.

Adjustments. I have learned not to sing to the girls first thing in the morning on weeks I have a cold. Now we’ve learned that we need to figure out a plan for Maddie to see her Daddy for even a little bit on Thursday afternoons. We will tweak the system and try again, but in the meantime, it’s wearying and we might cry a bit. Thank God tomorrow is a home day. I think sleeping in and doing school in our pajamas has just been A-listed for Friday…