I decided to test my two black thumbs this year by attempting to grow some tomatoes. This seems silly, maybe, because of the six of us, only one even likes tomatoes in their normal form, and he doesn’t cook at all, so why would I grow tomatoes?

Well, I’ve heard they’re hard to mess up and I also want to try my hand at making some sauces and such, so thought I’d give it a go. I have no idea what I’m doing. None. So that’s why my friend Joanna laughed when I told her exactly how many tomato plants I started. I’ll just tell you that I started a lot of them – so many that Joanna said I might consider giving my starter sprouts away once they start, because just maybe I won’t be able to keep up with that many.

Here’s a fraction of what I started, carefully guarded by what our friend Kent once termed “Ninja Fish,” and I’ve never been able to look at my poor attempt at art the same way since:

What Joanna doesn’t know is that I don’t really expect most of these guys to make it. I can kill silk flowers – I’m that good. I’ve already got a white fuzzy film growing on the outside of several of these things, which I could justify as a science experiment, considering we just read the chapter on fungi and mold in our Book of the Microscope this week, but truthfully, I don’t want them to grow moldy and die.

Oh, I decided to toss in a few carrot seeds as well, though at this point in time I can’t remember which ones are tomatoes and which are carrots (I did write it on most of them, but a couple of them got missed). I’m counting on something to become obvious over time to let me know what’s what.

Anyway, imagine my surprise when I glanced down at them today and saw sprouts! Real, new, green sprouts! There are only a few of them, but I’ll take it. And maybe it means more will appear soon. It could also mean it might be time for me to figure out where I’m going to put these babies since I’m planning to do a container garden and not an in-ground one. And I have no container yet. But that’s just a small detail, right? Here are my sprouts: 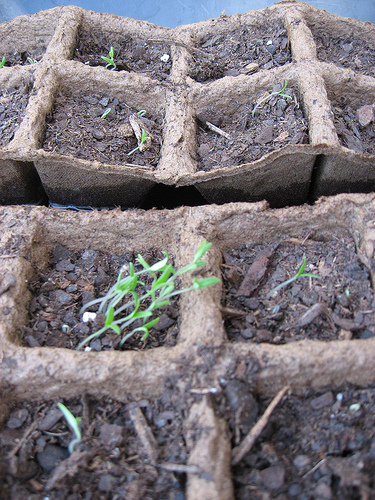 The girls were excited about it, too, until they saw the white fuzz growing on the outside and got all discouraged. Remember, I told them, this is an attempt. We’re trying something new and it might work and it might not. Let’s not be discouraged too much by the white fuzz and concentrate instead on the green sprouts.

I’ll let you know how things turn out.

4 thoughts on “Because I Needed a New Hobby”