Another year, another list. It's always nice to have a couple I started last year to give me a jump-start on this year!

by Jan Karon – Officially the last book of the Mitford series, though not the last of the Father Tim stories (I'm told). I began the series when I was pregnant with M9 and they have been enjoyable books over the past nine years. Karon is a good writer and the Christian story comes out naturally through Father Tim. It isn't forced or uncomfortable. I like these.

by Carolyn Mahaney – This was very good, and I'm thinking about re-reading it with a friend here in town. I'm also thinking about posting thoughts from it, by chapter, on my blog. If anyone would be interested in reading it with me, let me know. Maybe we can get the author to come over and give some additional input, who knows?

by Gloria Handel and Mickey Baskett – I know. You don't really read this book, but I've had it for a while and actually used it last night to give the girls haircuts. I've cut their hair before, but I've never really liked what I've done. I was pleased with how their cuts turned out last night, though, and I attribute the simple changes I made to the book, which paid for itself last night (four kids' cuts locally would cost $32 at a cheap place). A good investment.

A Wrinkle in Time

better, but I don't know. I don't really know much about L'Engle's worldview. I presume she was writing from a Christian one, as there is much biblical truth within the text, but there were some troubling allusions to universalism within the text as well. Still a good story, and good writing. The girls clapped at the end (which didn't help the going-to-bed part). We'll read more.

by Madeleine L'Engle – Ummm, can anyone say "teenage romance?" I had no idea! I didn't exactly finish it (I was reading it to my girls and didn't think it was quite appropriate at their ages). Maybe I should go back and finish it completely, but it's steered me away from L'Engle for quite a while. So much for the Austins. Disappointed.

Playing For Pizza: A Novel

by Rudolf K. Markwald – Biography of the wife of Martin Luther. I'd not known too much about the wife of the reformer. From page 89:

"Considering Luther and Kate's strong personalities and the challenges of serving an unending line of uprooted people with limited resources, the Luthers at times had strong disagreements. On occasion, Luther was uneasy with Kate's authority in the household…At one particular lowpoint in their finances, Martin had to turn down a friend who wanted to hold a wedding reception at Lutherhaus. Luther exclaimed, 'If I were to court a girl again, I would chisel myself an obedient wife from a rock.'"

It appears some marriage issues do not change with even 500 years between them. I may very well be the Katharina Von Bora to Craig's Martin Luther. God help us.

From the Mixed-Up Files of Mrs. Basil E. Frankweiler

by E. L. Konigsburg – Another bedtime read-aloud. I'm not sure how I ended up with a copy of this, but I'm glad I did. This 1967 Newberry award winner about two siblings who run away from home and spend a week in the Metropolitan Museum of Art in New York was a cute read and the writing was great. There were plenty of things to discuss with the girls from the book (namely, please don't ever run away from home!), but also Michaelangelo, art museums in general, and the value of the dollar and how it has changed in 40+ years. Fun story.

A Pagan's Nightmare: A Novel

by Ray Blackston – A fast read that fulfilled my desire for the easy and mindless. I've read Blackston's other books which are in the same genre: Christian Chick Lit for Everyone. His first book was his best, the other two in that triliogy were so-so and this one was, well, it was what I expected, so I shouldn't be disappointed. It pokes fun at the Christiany sub-culture and poses the idea of what if the world were made up of only cheesy Christians with just a few non-Christians left? It would be their worst nightmare. Really? It would also be mine. The writing is funny, and the idea was intriguing enough to keep me reading, but it never really went anywhere. Keep trying, Ray.

Peter and the Starcatchers

by Dave Barry and Ridley Pearson – A prequel of sorts to the classic story of Peter Pan. For some reason I didn't realize this before beginning it – had simply fixated on "Dave Barry" and "Children's Book" and popped it into my paperbackswap queue. It was an enjoyable read and we'll probably tackle the second book sometime, but we're taking a break from it because it was quite long.

Yep. Not a lot of reading going on for me these days. I blame it on all the sewing. But now that I've slowed down on the sewing I've got to find something else to blame it on. The laundry, maybe?

by Anne Tyler – Anne writes an amazing story. They are so sad but so good. She makes you believe the people she's writing about could very well be some neighbors down your street. This one was no different – heartbreaking, but true-to-life, good storytelling.

by E. Nesbitt – Sort of a "Five Children and It" with different children and different magical consequences. Still, good story and the girls enjoyed it.

by Leif Enger – I read this several years ago, but think this needs to go on my rotating list of rereads. Enger's wordcrafting is untouchable and his storytelling brings tears. Beautiful, heartbreaking, powerful. One of my favorite books.

The Penderwicks on Gardam Street

by Jeannie Birdsall – Jeannie does it again. She has quickly moved into a top position for the Dunham Family's favorite children's authors ever. We're all impatient that we have to wait for her to write her next one. Snap to it, please!

by Neil Gaiman – An interesting story, well-written, well-told. It had a Tim Burtonish feel to it and was a bit on the creepy side, but not so much that the girls couldn't sleep afterwards. I heard there's a movie being made, so that will be fun to see after reading this.

Wow, I really stopped reading this year. For shame! I'm trying to remember what I did actually read from June-December and I'm having a hard time figuring it out. I'll try to remember what they were right now:

The Witch of Blackbird Pond

by Nicole Mazzarella – I was predictably skeptical of this work of "Christian" fiction, but it was very different from what most would consider to be "Christian" fiction and therefore I liked it. That sounds sad, but the stereotype exists for a reason, you know what I'm saying? I should have written this mini-review right away for I can't remember specifics here. I do remember thinking some of the story was forced, a bit of it was less than believable, but overall, it was well done and I'll read more by her in the future.

So Brave, Young and Handsome: A Novel

by Leif Enger – This was certainly no Peace Like a River, but it was still very good writing. It took me forever to finish this book which is more of a commentary on how goofy our summer was and less about the captivating quality of the book. Enger is a rare breed. I look forward to reading more.

by Tim Kimmel – Excellent book. I've had it on the shelf for four years now and needed the incentive of the class to read it, but I'm so glad I did. Great book, well-written, worth your time.

by Ted and Margy Tripp – More of the same. Don't anybody shoot me here, but I remember really liking Shepherding a Child's Heart when I read it many years ago. I thought I'd like this one too, but reading it immediatly after reading Kimmel's book was tough. And the writing just wasn't that great.

There you have it.
A very dismal 22 books this year. Maybe 2009 will be better for reading?

In keeping with all the December crafting photos I’ve been posting this month, I couldn’t help but take a picture of a Christmas ornament I saw on my parent’s tree yesterday. Made by yours truly…in 1988:

Here’s this beautiful creation from the backside: 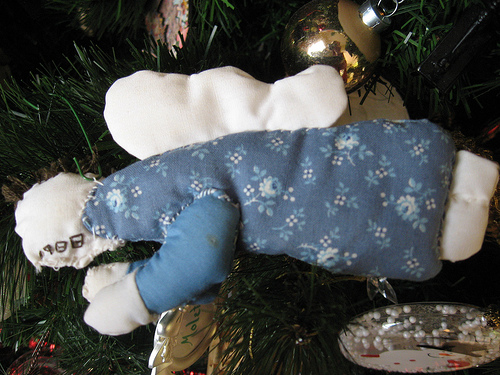 Craig said it appears I’ve come a long way in 20 years. Boy, aren’t we all glad? And my heartfelt apologies to both my sister and Christy who were recipients of many such handmade “goodness” by me during these years I was figuring out the beginnings of what now is a fun and productive skill. I sent Michelle a lot of crafty goodness when she was in college (and I had a strong affinity for plastic canvas and yarn – ugg!) and remember making Christy random things like a fabric holder for her glasses and a misshapen pillow or two.

Gals, neither of you ever made me feel silly for bringing you those things, so thanks for that. It’s okay now; it’s been 20 years. Go ahead and laugh with me.