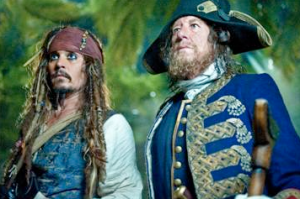 I'm telling you, this whole having kids old enough to babysit themselves thing is pretty awesome. It took us long enough to get here, but now that we are…well, we don't really utilize this new awesomeness that much, but it's super nice to know we can if we want to. And on Tuesday night we wanted to.


Pirates of the Caribbean, On Stranger Tides, sailed into St. Louis a few days early for a pre-screening. The past screenings we've gone to we've been able to take our whole family, but they anticipated a large turn out for this one and just gave us two tickets. And man, oh, man, they were right. The theater was PACKED including one tiny dog that apparently sneaked past security. They were tight on the cell phones and cameras alright, but tiny dogs? No problem!

Evidentally the tiny dog really likes pirate movies, though, because we never heard a peep from it all night and it was sitting right in front of us. Maybe he was mesmerized by the mermaids.

I'm definitely not going to outline the story for you – basically you know – there's this crazy pirate who gets in all kinds of mischief but he's hilarous in the doings of it and he survives in the end, savvy?

I'll confess that all of our kids have watched the three previous Pirates of the Caribbean movie and they were all bent out of shape that Craig and I were going to this one without them. But I'll tell you that while we were watching this on the big screen (and this was one of the few movies where I thought the 3D was effective and worth it) I was really glad the girls weren't there. I had kind of forgotten that we do have them cover their eyes are various parts of the others and there was plenty in this one that would have ignited our 9yo's throw up response to oversized violence. She would deny it, though. She's the one who loves the pirates the most!

We'd had a fair amount of family discussion on the disappointment of Will and Elizabeth not being in this one, but I'll tell you that while watching it, I totally forgot all about Will and Elizabeth until the movie was over and then I was all, "Oh drat, they didn't include Will and Elizabeth!" In short, it didn't take away from the movie at all. Johnny Depp is what makes this movie what it is, don't you know?

I enjoyed the Angelica character in this one and liked how the movie ended to set up the next one. Craig and I were talking about the various different ways #5 could end up going.

Overall, a fun way to spend a couple of hours and I'd defintely recommend seeing it on the big screen while you can. 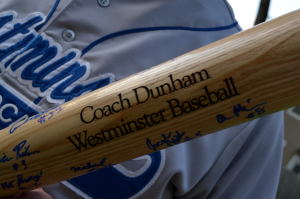 Craig was given a sword when we left Colorado. It seems very appropriate that our time in St. Louis will forever be marked by this bat. I wrote more about this at WORLDMag.com today.

Our time in St. Louis is quickly coming to a close, but we’ve barely had time to think about it in the midst of everything that comes with the normal springtime and the culmination of various recitals, events, end-of-year hoo-has, etc.

As I’ve turned over my own various responsibilities, I kept expecting to feel a twinge of emotion or regret or sadness or something. So far, though, I’ve just been numb concerning all of the things that have directly involved me. But my emotional faucet got nudged for the first time last week when my husband’s junior varsity baseball team finished its season with its 20th win, setting a new JV school record for most wins in a season, and the boys celebrated by giving Craig a water cooler shower after the game.

As I was shuttling our own kids to their various activities that evening, I missed the entire game, showing up just in time to see the boys dump the water on him. And I instantly teared up.

It wasn’t necessarily the water dump that made me cry; it was the connection these boys have with my husband that, though I’ve seen it all season long, we all really experienced last week as the season wrapped up.

In anticipation of his leaving, the boys chipped in and bought him an engraved bat, which they all signed. Their parents also surprised him by purchasing tickets for the entire team to go to a Cardinals game together. The water cooler shower was just their final way of saying thanks . . . and that they have really appreciated his role in their lives as their coach these past two years.

When preparing for a move, it is easy to get completely caught up in all the practicalities of what has to happen to make the move happen. It is easy to lose sight of everything and everyone we’re leaving. I think Craig needed the bat. He needed the tickets to the game with the boys. And he needed the water dumped on him to really understand the impact he made here in St. Louis, if even for only 12 guys, if even for only two years.

And I needed to be there when it happened . . . and I’m really glad I was.

In the spirit of Matthew 25, it’s these little things that matter most. “Well done, good and faithful servant! You have been faithful with a few things; I will put you in charge of many things.”

It could be said that being a JV coach pales in light of almost everything else, but I’m here to tell you that it matters. The investment my husband made in those boys made a difference. And I know 12 guys who will happily agree with me.