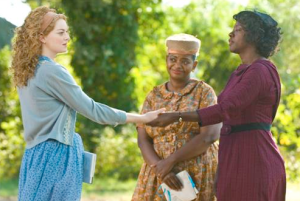 Craig and I took the girls to see an interesting movie this week. I wrote about my thoughts on The Help for WORLDMag.com this week.

With the exception of, say, Julie and Julia, books are generally better than the movies based on them, right? It’s almost impossible to capture the entire essence of the printed word in two hours or less.

Earlier this week, my family was invited to a screening of The Help, and having read the book earlier this year, I had high hopes for the movie but a nagging fear that it would not live up to my expectations.

As it turns out, The Help was no different from most book-to-movie adaptations in that some things were left out, but those missing pieces did not diminish the stirring, heartbreaking, yet hopeful story of domestic life that took place during the 1960s civil rights struggle in Mississippi. (Warning: The film does contain a lot of vulgar language.)

Raised in our modern day culture, my kids are vaguely aware of the notion of racial tension, but they have never been personally confronted with it. Although my girls have an understanding of the history behind the issue-we’ve read books together like Roll of Thunder, Hear My Cry, and biographies of Martin Luther King Jr. and Rosa Parks-they have very little firsthand experience with the emotion attached to the issue or the hatred involved, and thus have a hard time understanding it as a concept.

Taking the girls to see The Help helped them understand just how serious, sad, and senseless the racial divide was in 1960s America. There was more than one tear shed among us as we watched how the white women portrayed in the film so poorly treated their black house help. We also felt the tension of the white women not being present with their own children, which in turn created a bond between the children and the black women who actually raised them, causing confusion for all.

As the film credits rolled, we sat silent for a while before leaving the theater. My oldest daughter gave me a look of disbelief as she asked if that was really how some white people treated black people back then. I assured her that in some cases it was all that and worse. She shook her head in anger: “That’s just . . . so . . . wrong.”

Agreeing, I explained that while we’ve come a long way in redeeming race relations since the 1960s, we still have a long way to go. I believe true reconciliation among the races will never be final this side of heaven. Once glorified we will finally fully realize that “there is neither Jew nor Greek, slave nor free, male nor female, for you are all one in Christ Jesus” (Galatians 3:28).

Still, with young hearts and minds stirred by movies like The Help and, most importantly, informed and transformed by the Gospel, perhaps we can see God’s Kingdom come and His will be done now, on earth as it is in heaven.

At least that’s what I prayed for my girls on Monday night.