Remember how I showed you our homeschool perfection the other day?

I now bring you a bit of our homeschool reality:

Here’s a glimpse into reality:

This is our second grader, scrolling through all of her jingles and chants, still in her pajamas, and hanging out with our dog, Peaches.

She then used Peaches as her excuse not to sit up to do the writing portion I asked her to do because she would disturb the dog.

There you go: a bit of reality into our classical homeschool utopia.

Really, though, reality doesn’t look too shabby, does it?

The second grade had their annual Greek Festival this past Tuesday. One of the beautiful things about being the “new” family is that so far I haven’t been tasked with many school responsibilities. Granted, when nobody else was available to be the 3rd grade homeroom parent, I volunteered, but so far it’s been an easy gig.

I found out on Tuesday just how much work the Greek Festival actually was and all I did was stop by Sam’s on my way for some kind of Greekish dessert and and show up willing to man the archery station during the “Olympic” games. Easy peasey. For me. It didn’t take much time at all for me to figure out that many man-hours (or should I say mom-hours) went in to making the festival what it was and I was grateful for every single one of them. I was more grateful that they weren’t my mom-hours. My time will come, I’m just glad it hasn’t come yet.

The kids started off by giving a presentation in the chapel with all the Greek songs and chants they’ve learned so far this year:

The togas were super easy to do. We just had to get a large white t-shirt, pop their names on in Greek letters (some used fabric markers, some iron-on transfer paper), and cut the sleeves off. A bit of twine took care of the rest – instant toga!

After the presentation we walked across to the gym area for the feast and Olympic games. The first unplanned game was actually, “Who can walk across the wind tunnel and not lose your wreath?”

And the feast. The moms did a great job pulling this off. My contribution? You see those grapes in the front? Yep, that was me. And that store-bought plate of something I don’t know the name of in the back that looks like it has jam inside? I bought those at Sam’s too. 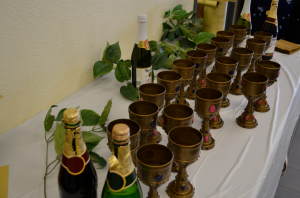 Of course I took more pictures of my own child than the others. It’s in my job description. 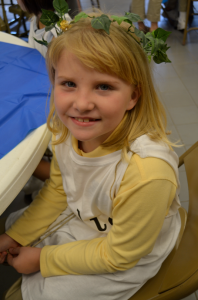 Here are the kids on their way to the Olympic games:

I brought Maddie with me to help with the games. She was tasked with leading the hurdles.

I also brought Chloe with me. She’s hard at work at the archery station.

We actually did work hard most of the time, but there were a few pockets in which we didn’t have any kids at our station. You are seeing one of those times.

Here’s one of the chariot races: 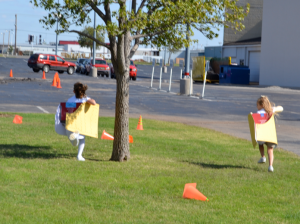 And the awards ceremony:

Super fun event, super fun time. I’m totally digging the blended model school system. I love, love, love having my kids home part of the time and having them at school part of the time. The Greek Festival is just one of the perks of this system.

Thanks Veritas Moms and Teachers! You all rock!

So you know we moved to Oklahoma to be part of a blended model school, correct? Craig is launching a video contest for families to show us what the home part of their experience looks like. We filmed our own version as an intro. Check it out:

VCA Home Day Intro Video from The Dunhams on Vimeo.

PS: There are bloopers and outtakes at the end.

And real quick, for the record, I’d like it to be noted that while I can’t prove it, I’m pretty sure this might be the very first time the names Jack Black and Ann Voskamp have appeared together in the same blog post. I’m all creative and interesting like that. *groan*

In real life we have new neighbors who moved in across the street and they are all kinds of awesome. We’re enjoying getting to know them bit by bit. This information is important to this story because in my dream Ann Voskamp and her entire family live in this house WITH my new neighbors.

They don’t exactly live together, but the house is split like a very large duplex. My new neighbors live on the right side and the entire Voskamp family live on the left. I have no idea how long this situation has been going on, but in my dream it was as though it had always been this way. Ann Voskamp lived across the street from me and I didn’t know her very well. I saw her hanging out on the front porch one day and walked over to have a chat. We hadn’t really done that before even though we lived across the street from each other. She was awesome and invited me into her side of the house. Details get fuzzy at this point, but I’m pretty sure I helped myself to the inside of her fridge and fixed lunch for my whole family while she watched. She then had another friend drop in – one she was expecting. She also took an important phone call. I never got the hint. I kept hanging around in her kitchen waiting for her phone call to end so we could continue talking. I might have sneaked a peek down the hall as well. I was curious as to how they all fit in that half of a house.

When I finally realized I was, you know, in the way, I thanked her for the sandwiches and walked across the street back into my house.

Now then. Wasn’t that strange?

I find I have an interesting pattern here on my blog. Interesting to me, that is. The more real life stuff I have going on the less I either can or want to write about it. Sure, I process the world and everything in it by writing, but that does not mean I need to or should share that with anyone else.

Last month, I started writing for God’s World News again. It’s writing I enjoy and I mostly have adequate time to get it done on time. It’s meeting a need for our family as well, which is a great thing. Last week, I stopped writing for WORLDMag.com. I cried. I laughed. I’m moving on. Disappointments, relief, and future promise, all wrapped up into one.

Two weeks ago Craig met a guy hanging from the very end of his rope. One week ago that guy called Craig, reaching out for help. We took him in for the weekend, made more coffee than our Keurig coffee maker pot has ever been asked to make before, and the girls drew pictures for him and ministered to his weathered soul in a way most of us will never be able to. Even our dogs loved on this man in a significant way this weekend. Yesterday, Craig checked him into a rehab place for the next 10 days. We’re praying for him. We’re planning a (very small) party for him for when he gets out. We’re hoping. Disappointment, relief, and future promise, all wrapped up into one.

One of my kids is really struggling with Latin. This same kid, who has previously really struggled in math, is carrying an A- right now, seven weeks into the school year. Disappointment, relief, future promise.

August was a bad financial month for our family. September was a good one. October is a big fat mystery. Disappointment, relief, future promise.

I think somewhere in my life I used to believe that if I could only do all the things good Christian girls are supposed to do, I was owed something. Of course, I understood that Christ paid it all and only through Christ could salvation be obtained, but I think I wasn’t just interested in salvation. I wanted good and safe and secure and I wanted it now. I wanted it because I was good. Because I followed the Christian rules. Because I earned it.

I wonder now just how long it’s going to take me to stop trusting in myself for my sanctification.

I have no idea why life plays out the way it does. Why are hard things really HARD? Why do some people seem to have it so easy? Why do some people have lives that suck so much you can hardly stand to be around them? Why do we condemn everyone around us who we perceive ourselves to be better than for fill-in-your-own-twisted-blank?

I needed a reminder of reality today of the Isaiah 53 variety:

Surely he has borne our griefs
and carried our sorrows;
yet we esteemed him stricken,
smitten by God, and afflicted.
But he was wounded for our transgressions;
he was crushed for our iniquities;
upon him was the chastisement that brought us peace,
and with his stripes we are healed.
All we like sheep have gone astray;
we have turned—every one—to his own way;
and the LORD has laid on him
the iniquity of us all.

And I’m forced to ask myself the question, “So do you still feel like you are owed something for good behavior? Because let’s take an honest look at your heart, shall we?”

I am not owed a life free from hard things. I can’t earn safety or security because I follow the rules. I do not deserve either the life I’ve been given or the promise of things to come.