Yes, yes, I realize the December Photo Project officially ended yesterday, but I think this is the first year I actually posted a photo for every day of the month. Now I can’t seem to stop.

Craig surprised all of us tonight when he sold off a bunch of his old keyboard equipment and came home with the entire 56-volume collection of Nancy Drew books (under the red fabric above) and a Wii for the girls. He also souped up my iMac by hyper-caffeinating it with a gig of RAM and replaced the fm radio adapter for the van so we can listen to the iPods while we drive.

. I have a feeling tomorrow will be more of the same.

Merry Christmas to all of you. 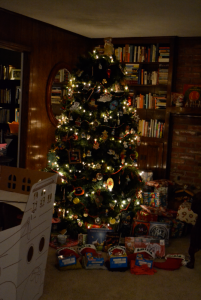 I broke a cardinal rule before taking my entire family to see War Horse earlier this month. I did not bother to watch a single trailer or even read a synopsis of the movie. And, no, the name War Horse did not even tip me off. It’s been *that* kind of a semester. So, yes, I took my 12, 11, 9, and 8 year old girls to see a movie about war. And horses. And war. And I didn’t realize I was doing it. I just thought, “It’s Steven Spielberg, for cryin’ out loud, it’s going to be awesome!” I kind of forgot about the Saving Private Ryan side of Steven Spielberg and was focused very narrowly on the ET side of him. You might see where this is going.

And my justification for ignoring the not-so-subtle hint in the title of the movie? Seabiscuit. That movie was not about biscuits on the sea. It was about a race horse. So in my warped mind I thought we were going to watch a family friendly movie about a race horse named War Horse.

Here’s my first disclaimer: While watching the movie on the big screen, I was kicking myself multiple times for taking my girls to see it. But here we sit almost four weeks later and I can’t say I’m sorry we did that anymore.

Immediately after watching the movie I tried to sum it up for my friends by calling it a mash-up of Saving Private Ryan and My Friend Flicka. How in the world? But it’s still kind of that way in my mind. It’s a sweet, sweet, hard, hard story of a boy and a horse. And let’s not forget the war, but at the core, it’s about the boy and the horse.

I don’t want to give away the movie for those of you planning to see it this week. I’ll just throw out this little word of caution: Consider that the war scenes are fairly brutal. Not nearly as brutal as some movies, but if you are taking young kids with you, this is a consideration best made on the front end. I’m not sorry my children saw the movie, but hindsight tells me that my two youngest would have been better served by watching it as a DVD on our small TV instead of in the theater.

My 12yo, however, seems to have been deeply impacted by the movie. She sobbed like a baby several times throughout and when the credits rolls, announced it to be the best movie she’d ever seen.

Here are the official specs:

Based on the book by: Michael Morpurgo and the recent stage play by Nick Stafford, originally produced by the National Theatre of Great Britain and directed by Tom Morris and Marianne Elliot

DreamWorks Pictures’ “War Horse,” director Steven Spielberg’s epic adventure, is a tale of loyalty, hope and tenacity set against a sweeping canvas of rural England and Europe during the First World War. “War Horse” begins with the remarkable friendship between a horse named Joey and a young man called Albert, who tames and trains him. When they are forcefully parted, the film follows the extraordinary journey of the horse as he moves through the war, changing and inspiring the lives of all those he meets—British cavalry, German soldiers, and a French farmer and his granddaughter—before the story reaches its emotional climax in the heart of No Man’s Land.

The First World War is experienced through the journey of this horse—an odyssey of joy and sorrow, passionate friendship and high adventure. “War Horse” is one of the great stories of friendship and war— a successful book, it was turned into a hugely successful international theatrical hit that is currently on Broadway. It now comes to screen in an epic adaptation by one of the great directors in film history.

Disclosure: Tickets were provided for my family to attend. No other compensation was received. 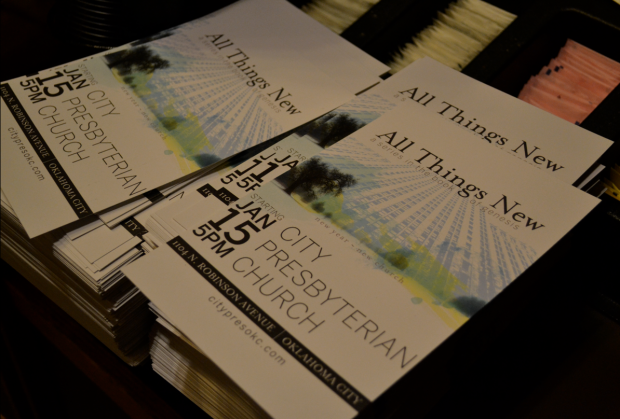 We’re getting closer to the official launch! City Pres in Oklahoma City, here we come!

VCA Staff Party. I did not make these, but I definitely will in the future. So easy and so yummy.

I was in charge of Katie’s class Christmas party today. I told the kids they could make their snowmen however they wanted to. This kid took that statement about as far as he could.

December 14, in which Craig and I have now been married for 15 years. After waking up from our late-afternoon school-induced respective comas (his from administrating, mine from homeschooling), we debated the following scenarios:

1) We go out to dinner by ourselves.

2) We get take-out and bring it back.

3) I take the girls out while Craig drops dead again into his after-school coma and then bring him something back.

We opted for #4 because when you are nearly dead the prospect of preparing dinner for your kids so you can go out to eat only to come back to the need to clean up your kids’ dinner did not sound like an awesome way to celebrate fifteen years of very very hard work. And also, we felt like Craig really probably should be present.

We went to Red Robin. And we were happy. 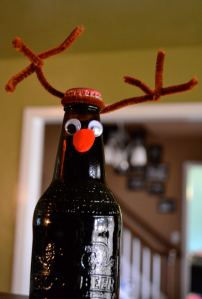 I’m going to be rocking the 3rd grade class Christmas party on Thursday with these easy to make, and super cute Root Deer bottles. Thanks to some friends on Facebook, this craft got a whole lot easier with the purchase of a $4 box of glue spots from the scrapbook section at Walmart. Instant stick and no mess. Awesome.