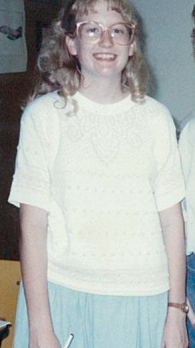 Dear Maddie and Chloe (and in four more years Katie and Millie),

It doesn’t really seem that long ago that I was in 7th and 8th grade. My educational experience was pretty different from yours in that my class size was over 300 whereas yours hovers around 16. I never read Julius Caesar, though we did have a Shakespeare festival during high school, so I’m assuming that means we did read some Shakespeare at some point during those years. I was a straight A student, but I don’t know how much I actually learned, other than how to be a really good test taker and how to sound like I knew what I was talking about by writing a killer paper. Those skills carried me through college, too, by the way.

But there are some similarities in our experiences too. The middle grade years are rough seas to navigate. With all the other blessings and burdens of being 12, 13, 14-ish, we are also given the awesome gift of relational paranoia. Hours that could have been spent doing a thousand other things, thinking way more noble thoughts, were instead dedicated to convincing myself that *most* of the girls in my class and *all* of the boys in my class thought I was fat and boring. I was never a cheerleader. I tried out for the school basketball team in both 6th and 7th grade and didn’t make it either year. I thought you had to already know how to play an instrument to join band, so I never did. Anything I could do to divert attention from myself was exactly what I did. Except for those late-80’s Baptist-culture Little House on the Prairie jumpers I thought were so awesome to wear. I’m guessing those didn’t do a very good job of diverting attention from myself, but I digress.

Cool girls were in every one of my classes. Girls who were popular with everyone, including the teachers. Girls who looked cute in everything they wore and everything they wore had “Guess” or “Izod” on the pocket. Aunt Michelle and I begged for a pair of Guess Jeans overalls one year and we traded off wearing them. She was in high school and I was in jr. high, so I don’t think anyone ever really noticed that we shared them. Swatch watches and colored Keds. Those were my attempts at fitting in during those years.

But I heard the popular girls giggle and whisper as I walked by. I made the natural 13yo assumption they were making fun of me and I spent most of those years devastated by what I thought others thought of me. What never occurred to me at all at that time was that more often than not they probably weren’t thinking about me at all…

Girls, I see the turmoil that churns in your hearts at times. For one of you it churns much more rapidly. For the other of you, you keep it to yourself most of the time. But I wish with all my heart I could convince both of you that you’re beautiful just the way you are. I know. You may not believe me and I know it sounds cliché, but it is so true. And character trumps jeans-size both when you are 13 and when you are 38 and I see the character that is developing in both of you and I’m thankful. So very thankful.

But there’s a confidence that has to be grown into that, darn it, just doesn’t come naturally to most of us. And it makes living in community with our peers hard sometimes. I want you to know I understand that. And when I try to tell you to push through it, it isn’t because I don’t believe you, it’s just that I know these seasons pass. And then, like winter, they come back again, but then they pass again. The cycle of life you are experiencing right now will be repeated again later on, but the big difference will be in your growth as both a woman and a child of God. You may still feel the churning in your heart, but you will be able to better rest in the security afforded you in Christ.

Tomorrow night I will put on my only pair of nice pants and my black shirt I bought at Walmart for “nice” events two years ago. I will walk into a room to people I was so afraid of in 1992 and I will probably still be a little nervous. But the difference this time is that I don’t view my worth anymore by what I *think* they think of me. My worth comes, not on the basis of anything I have done, but only because of what Christ has done for me. I knew that in 1992, but I believe it in 2012. And it makes a significant difference.

Psalm 139:14 says, “I praise you, for I am fearfully and wonderfully made. Wonderful are your works; my soul knows it very well.” Girls, my prayer for you at this moment is that you will not just know that, but you will know it very well.

I hope you believe that.

PS – There may come a time during high school when you think it would be a really good idea to ask one of your friends to ask her boyfriend to call a boy you like and see if he might want to take you to a school dance. Please don’t do that. You might regret those foolish five minutes for the next twenty years of your life.