7th grade class Christmas Party playing dirty Santa. And peacefully unaware of the devastation of the morning coming out of Connecticut.

Connecticut, we weep with you. 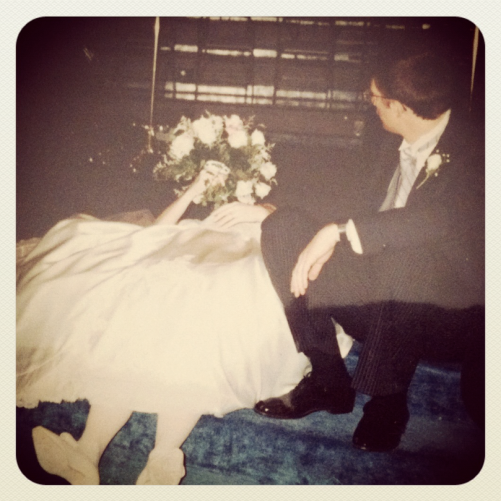 Tonight at dinner we were discussing tomorrow’s family schedule and demands on the van. Craig asked me what it looked like and I fired off:

And that’s where we laughed. This is pretty typical for our existence these days and that’s not going to change simply because the calendar reminds us that something pretty important happened on that date at some point in our history.

It would be easy for me to say at this point that I never expected life to be as crazy as it currently is when we hopped on this ride 16 years ago, but I think that to say that would be a disservice to the 16 years of complete crazy we’ve already had. I mean take a look at the photo above. We started out crazy.

And it’s crazy to think that here we are, 16 years in, with one of the best jobs Craig’s ever had and yet with more financial stress than we’ve ever had either and I just scratch my head. What’s up, God? As though I’m trying to make Him pay attention to us for a bit. As though He hasn’t been all along.

Because while having only one functioning heat unit in a house that needs three may seem crazy, we’ve been spending quite a bit of time together in the main part of the house. We’ve been watching less television since the TV is in one of the coldest rooms of our house. Is this reason for self-pity? Not so much.

And while having only one functioning vehicle is a major drag, and believe me, it’s a major drag, we’ve been syncing up the family schedule much better for the past couple of weeks and actually getting some pretty decent discussion time in since we’re all in the same vehicle together most of the time. Is this reason for despair? No, not really.

Life stops at the forked roads and often takes the path we would never have chosen for ourselves. Sometimes it turns us around completely. And sometimes it causes us to argue the entire way there. But 16 years in I have to believe that still being in the same car together at the end of the day has to count for something. It just does.

So here we are, 16 years later. For better and for worse. And there’s nobody I’d rather have in the driver’s seat next to me.

I love you, Craig. Always and forever (cue Kip Dynamite).