Last Tuesday, the Tuesday that shall not be named, was a doozy on the schedule. Nevertheless, I knew I’d be in town anyway taking three kids to choir in spite of the fact that Maddie could not go that night because of her knee surgery. It just so happened that Citizens Caring for Children was hosting a Halloween party that evening for kids in foster care. It wasn’t far from the choir rehearsal and I had a feeling the boys would not be with us on the actual Halloween night, so I dressed them up and we headed over for some candy and booth game fun.

It was a super fun time for the boys and I was really glad I’d taken them even though I was drop dead tired. But once again I was struck by the number of kids there and the trade these kids’ lives have been forced to make, taking a series of fun events in place of the normalcy of consistent family living. When you stop to really think about it, it almost takes your breath away with the sorrow of it all.

Two days after this event I found myself in an unusual situation. I was simultaneously picking up Baby T from his parent visit while also dropping off A5 and R4 for one of theirs. I had probably the longest conversation with Baby T’s mom that I’ve ever had and she was casually volunteering some information about one of her other children that was simply heart breaking. Yet in the telling of the story there was no emotion present. She was just stating things as they happened, like this was normal life, and this was just the way things go sometimes.

And I wanted to cry for her. Later on I did cry for her. Because the story she handed over to me that night needed to be wept over.

Three and a half hours later I got inserted in the middle of another one that still hasn’t completely sorted itself out and I found myself consoling crying boys who found themselves stuck between loyalty and security. It’s an impossible place to find yourself, even when you are almost 40, let alone 4 and 5. On one hand, you know you *should* feel and do and be one way and on the other hand you know how safe and secure the other one is and you are conflicted. Do you give up one for the other? Is it possible to have both?

I see how easy it is for professional child welfare workers to distance themselves from the intense emotion of what they do. I’m not sure how you could really do that job any other way.

Yet it is a job that requires another way. Because we can’t just check these kids back into a file at 5pm on weekdays and say, “See you again tomorrow morning.”

And so we give it. Because if we don’t give it, they aren’t going to get it. But in the giving of it, we are burdened by their stories.

And the weight is just almost unbearable. 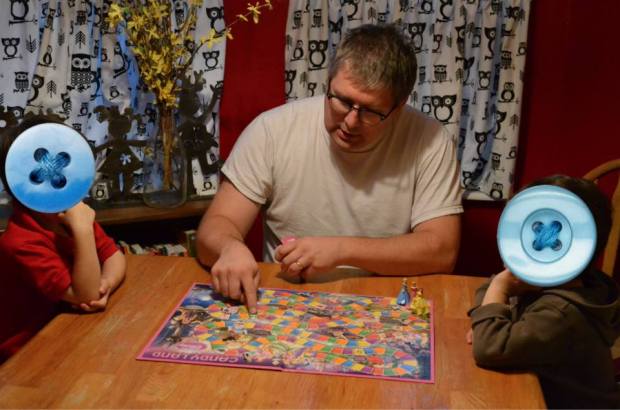 A5 really wanted to play a game this evening. He had asked me several times from the time he came home from school and I just wasn’t able to when he asked. So when it came time for me to take the girls to choir tonight I asked Craig, aka: Mr. No Games Ever, No, Don’t Even Ask, if he would be willing to play a round of Candy Land with the boys. It was a Lordship decision for him for sure, but he did agree to do it. What he did not realize, however, was that since we said good-bye to almost all of our preschool level games years ago, I picked up this version of Princess Candy Land a few months ago when it was on clearance at Walmart. I popped it on the table and said, “Well, boys, the bad news is that it’s Princess Candy Land, but the good news is that Dad’s willing to play it with you.”

There were giggles from the girl squad as we heard the guys claiming their pieces, “Who wants to be Belle?” and “I’m sleeping beauty!” Seriously. Funny.

And so I snapped a photo, told them all I loved them, and left them to it. These three are keepers right here. Every one.